My first PC was a Gateway 2000 back in the late 90's. I drove to Sioux City to pick it up from the Gateway outlet store. For a number of years after that, I would typically build my own PCs. Omaha had a store named "DIT Computers". It was full of PC components. You could select a case, motherboard, cpu, RAM, graphics card... and walk out with everything you need to assemble a PC that evening. At some point in the mid-2000s however pricing seemed to shift to where it became more expensive to build your own than to just buy. At that point I shifted to buying Dell XPS systems.

Before Alienware and the Dell G5, the XPS was the go-to for a base gaming machine. Over time you could upgrade the video card (back when they were reasonably priced and plentiful), maybe add more RAM, or update the spinning drive to an SSD. The machines ran forever. Dell seemed to really have the case/cooling/processor figured out. Furthermore, the Dell support site is consistently decent. If you decide to rebuild your PC (re-install Windows) you can just enter your PC Service Tag into the support site and get all the drivers for your specific PC. This continues to be less necessary as Windows evolves, but it's still handy especially for BIOS updates.

Windows 11 is being released on Oct. 5th, 2021 and as an IT professional and tech enthusiast I'd like to upgrade to this new OS. However with this update there are certain PC requirements. Specifically, for Intel CPUs, they need to be 7th generation or later. My current PC was only a 6th generation CPU, and Intel is currently on 11th generation so it appeared it might be a good time to upgrade hardware. Note that the 6th generation XPS had received RAM and SSD upgrades, GPU upgrades, and several OS rebuilds over the years, so it while was "old" it still worked quite well. It now acts as my secondary work computer, while it's predecessor, a 4th generation XPS (also still working quite well) is now shelved for parts.

This XPS 8940 out of the box is good. For most people it would work just fine, however if you put a GeForce 3060 TI in a PC, you should know your typical buyer isn't "most people". And it's not that the machine is bad, it just that it could have been, out of the box, really good.

A couple of guys on YouTube summarize the issues well, and provide some good suggested changes to the PC. Their videos are here and here if you want to watch the long summary.

Here is the short summary:

Here is what the PC initially looked like inside: 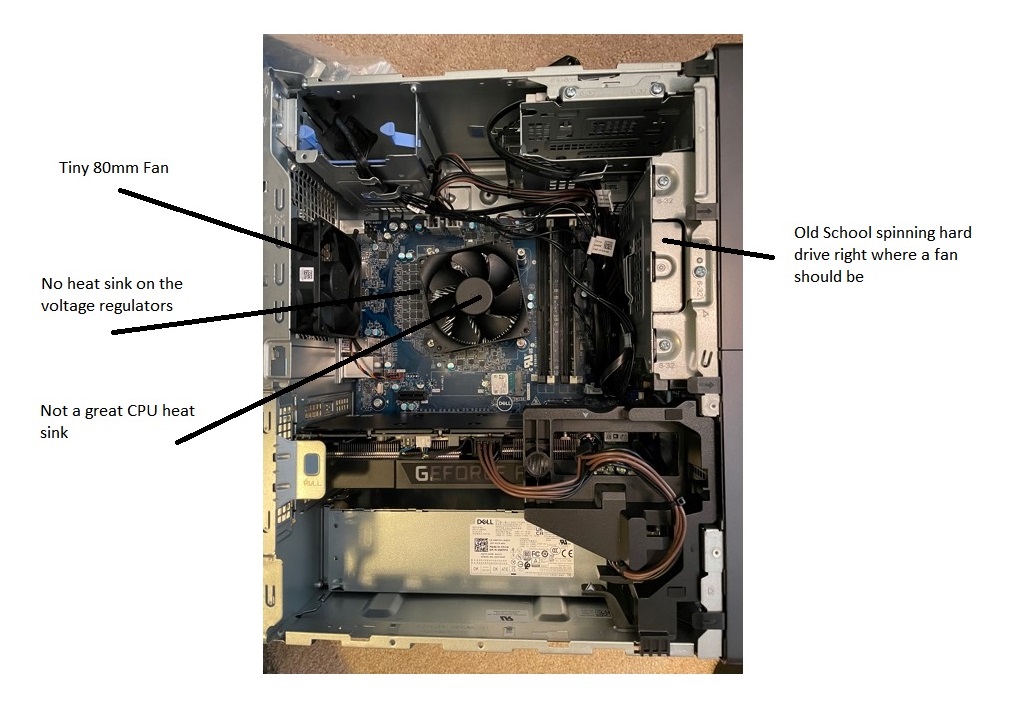 Other issues... These I was mostly aware of at the time of purchase.

I feel that for minimal additional cost, Dell could have resolved these issues and made a good PC a great PC out of the box.

Here is how I resolved the issues. First, I removed all the following from the PC:

I then ordered the following:

I 3D printed this awesome bracket for the front 120mm fan. With this is fits using the mounting points from the spinning hard drive bracket.

Total cost for replacement parts was about $517.

Here is the internal photo with all the parts installed. 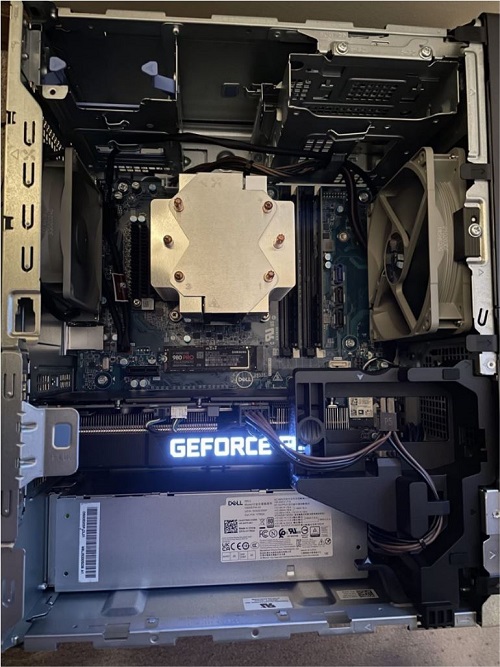 The PC is of course ready for Windows 11. The can be determined by downloading the PC Health Check App from here (at the bottom of the page).

I was disappointed by the out of the box experience of the Dell XPS 8940. I think Dell could have done a much better job with this PC architecture for minimal additional cost. However I enjoyed the upgrade process, and in the end I feel I have a PC that will work as a solid workstation (and occasional gaming platform) for the next 5 years.